What Is The Penalty For Refusing A Breathalyzer Test In NJ?

Home/DWI, Penalties/What Is The Penalty For Refusing A Breathalyzer Test In NJ?
Previous Next

What Is The Penalty For Refusing A Breathalyzer Test In NJ?

If you’re facing charges of refusal on suspicion of drunk driving in New Jersey, you may be asking what type of penalties you could receive.  The penalties usually won’t warrant throwing you to jail; however, they can be quite serious.  No matter where you live, New Jersey law requires you to provide breath samples to the police if arrested on suspicion of DWI.

Penalties for refusing to provide a breath sample include a $300-500 fine, mandatory drunk driving classes, installation of a breathalyzer on your car for 9-15 months, and a $1000 surcharge payable to motor vehicles every year for three consecutive years.

You may also be wondering what constitutes a police officer’s right to file a charge against you, how the court will determine these cases and how an attorney can help you overturn the charges.

What Are The 3 Standardized Field Sobriety Tests?

Only three roadside sobriety tests have been scientifically validated as evidence when properly administered. They are the One-Leg Stand, Walk and Turn, and Horizontal Gaze Nystagmus.

Can You Refuse to do a Field Sobriety Test in NJ?

If you are stopped by the police on suspicion of driving while intoxicated in New Jersey, you do not have to submit to field sobriety testing. It is not required by law and you cannot be ticketed for your refusal to do those tests.

There are many examples where an individual could be charged with refusal to take a breathalyzer test.

Remaining silent: The accused individual must show a willingness to perform the test assertively. Although it’s within a person’s constitutional right to remain silent, the New Jersey courts have stated that this does not apply when questioning an accused individual of taking a breathalyzer test. Silence will be interpreted as a refusal to take the breath test. 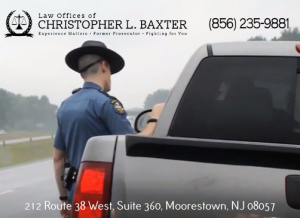 Short samples: An individual may purposely look to manipulate the test by performing a “fake” blow intentionally so that they are unable to provide enough air volume to register a valid reading. This manipulation in volume or duration of the breath sample can warrant a refusal charge.

Outright refusal to take the test: If the accused flat out says “no,” then a refusal charge can be immediately filed.

Stall or delay taking the test: Attempting to delay or stall taking the breathalyzer test will be interpreted as a clear refusal.

Not affirmative with your answer: Taking the test must be affirmative. Anything short of an “I will” or “yes” will be construed as refusing to take the breath test. If a person attempts to use words such as “Can you tell me..” or “if..” the officer has a right to submit a refusal to the breathalyzer test.

What are the Refusal Penalties?

Every time a person refuses to take a breath test penalty gets significantly worse. Knowing what the penalties entail will ensure that you always take the test or discourage you from driving while intoxicated.

If the accused driver is convicted of their first offense for refusing to take a breathalyzer test, the court is mandated to impose the following penalties:

The penalties will increase for the second offense of refusal.

Being convicted for the third time will warrant serious consequences, including:

What Must the State Prove?

Before an individual is convicted for refusing to take a breath test, the state has several things to prove beyond a reasonable doubt, such as:

Reasonable grounds: A police officer doesn’t have the right to pull over any vehicle and request the driver to submit a breath test. Usually, the driver had to have committed some form of motor vehicle violation that would lead to a probable cause standard. Random stops of vehicles will not satisfy the probable cause standard. Since it’s an abstract concept, the courts will determine a probable cause on a case-by-case basis. Typically, it involves the officer submitting concrete information such as excessive speeding, reckless driving, hitting something on the road, etc.

Refusal Warnings: Before administering the breath test, a police officer must fully explain and advise the penalties for refusing to take the test. There is a verbatim script provided by the New Jersey Attorney General that the police officer must read to the defendant.

Delays in taking the test: Understandably, an accused driver would attempt to delay or refuse to take the test if they fear being charged with DUI. A police officer must take the breath sample quickly if they have a suspicion of drunk driving. It is possible to disprove a delay as a refusal if the accused asks questions to understand the reasoning and protocol for submitting the breathalyzer test.

How an Attorney Can Help

Many attorneys who win these cases will prove that the charge of the breathalyzer test and its refusal is improper. An attorney will investigate the case and will uncover the answers to the following questions:

Many experienced attorneys can defend their clients and identify potential issues that make their charge for a refusal of breath test invalid.

There are many types of defenses to refusal charges and drunk driving charges. Don’t assume that you need to plead guilty to these refusal charges automatically. A lawyer who has experience dealing with New Jersey breath test cases can defend and overturn some of these accusations to avoid penalties.

How to Defend a Refusal Charge

There are many ways to fight against a refusal charge in New Jersey. The best way to defend the charge is to question whether the officer had probable cause to stop the driver in the first place and whether it was on private property. Many police officers will make mistakes when pulling a person over. If there was no articulable reason to stop the vehicle, an attorney could easily argue that the stoppage was illegitimate. This means the charges will be dropped.

Another way to defend against these refusal charges is to question the probable cause to request a breathalyzer test. Many officers will observe your demeanor, physical appearance and ask you questions before proceeding. They may cite symptoms of drunk driving such as slurred speed, fumbling movement, or blood-shot eyes. The officer will then have the drivers exit their vehicle and perform a field sobriety test. If the individual passes the field sobriety test or if the police officer doesn’t administer the test correctly, the charges can be dismissed.

It’s always best to read up on what defenses are at your disposal and speak with an experienced lawyer to see what options you have available to fight against your refusal charges in New Jersey.

About the Author: admin